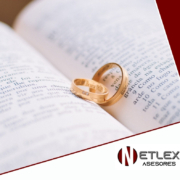 Who has never heard someone say “I am married in a marriage regime of separation of assets”?

The first thought that a person outside the professional or legal field might have on hearing this phrase would be: why do they do it, is there not enough love or trust in that couple to maintain a regime of community of acquisitions? These questions are quite logical, since most people are aware that in “community of acquisitions” all assets and rights (also obligations) generated and/or acquired during the duration of the matrimonial property regime belong to both spouses, even if only one of them works (solidarity regime).

Let us imagine the case of a husband who is a lawyer and/or economist and his wife who is a housewife and/or a worker with a much lower salary than her husband. One might ask, wow, if that couple divorces, the wife will be left with “just enough”, perhaps she will get a compensatory pension and/or alimony, but the assets earned by the husband will be all hers.

The above argumentation is not without reason. However, we must say that, on most occasions, it is not the “lack of love or trust” but rather the opposite, as the purpose would be to create a “protective cushion” so that the entire marital assets do not respond to the payment of possible future debts that could accrue through the professional activity of the “lawyer/economist spouse”.

When a couple is married in community of acquisitions, all the assets of the marital partnership could be liable for the payment of debts generated by one of the spouses, whereas if they are married in a marriage regime of separation of assets, only the assets belonging to that debtor would be liable. The professional activity carried out by certain professionals, such as lawyers and economists or tax advisors, are high-risk professional activities, given that in the event that they commit professional negligence, they could be held liable for the payment of amounts that have had to be previously assumed by their clients for work not carried out with the diligence that could be demanded of them.

It is true that, on most occasions, professionals have taken out civil liability insurance to cover this type of contingency, however, on many occasions having such an insurance policy does not fully guarantee that they are safe. Therefore, as a second line of defense to safeguard their marital assets, they decide to define their marriage regime as separation of assets. While this regime is in force, it is usual for the spouse who accumulates resources to transfer part of them to the other spouse with the sole objective of balancing assets between them, applying a principle of “justice” in the distribution of marital tasks. Currently, in Andalusia, a 99% tax bonification is applicable to donations made between spouses.

Seen the above, there are three lines of defense that any businessman or professional should try to minimize any future “negative” contingency due to their professional activity in the marital estate. The first is to take out civil liability insurance, the second is to choose a marital regime of separation of assets, and the third is to donate assets to the spouse before unpaid debts could accrue in the future. This last line of gifting, in some cases taken up in court rulings, has been considered to be an asset stripping in case of future debts, so that one should be very cautious in doing so. This is the reason why, from our point of view, it would make much more sense to apply a special matrimonial property regime, which is not usually used in Spain, but which would avoid the fact of making “continuous” donations between spouses to balance the assets of both (in the case of having opted for the matrimonial regime of separation of property). This special regime is called the matrimonial regime of participation.

This regime would be a “hybrid” between the separation of assets regime and the community of acquisitions regime, in the sense that while this participation regime lasts, the marriage is governed by the rules of the separation of assets regime, and upon its termination (which may occur at the will of the parties, or when the marriage is dissolved) the profits generated by both spouses, during the time that this regime has been in force, must be distributed equally between both spouses. This would avoid having to donate assets from one spouse to the other, or at least reduce them considerably.

If the marriage is under the community of acquisitions regime, and the decision is taken to modify it to the participation regime, it would be advisable to proceed to the liquidation of the matrimonial assets (separating the assets), so that the assets and rights that correspond exclusively to “both spouses” from the beginning of this regime are well defined, in order to avoid that part of the assets previously existing (in matrimonial property) could respond to the payment of possible future liabilities of the professional or business spouse.

Netlex advisors in Marbella will be pleased to assist you with any queries you may have in relation to the different matrimonial property regimes in Spain.